Quite a lot of people are using DAP as a preparation tool for real paintings. And I am not exception and used DAP occasionally to simply “pre-chew” a boring photo into something paint worthy. The idea of U-Paint is that it breaks image into various steps and layers that can be helpful for real-world painting. For example I often want to see the values (something called zones in photography) which is a stepped grayscale version. U-Paint is driven entirely by reactor and it creates a series of images that you can then export and use for painting (we are talking about real painting here). You can have it display in various ways as a step by step cumulative display where next step will just add on top of previous steps, as a mask previous step – where stuff that had been already painted will be masked out with a color, or as transparent stackable layers. This of course all depends on the reactor file to return the correct images – which are basically like the last option – a series of transparent stackable overlays. There are few reactor preset supplied and I am planning on making more. For example we can look at the Mono Wash which is probably the most obvious. Imagine you use single thin watercolor paint and then paint first very light layer of a light shades, let it dry, paint next layer of darker shades on top etc…

And Indeed I actually painted this way more than once. There are other Reactor presets that try to break down a color image into groups of colors by either hue or simply start painting in blocks and then refine the blocks further with smaller details. If you have Reactor installed you can look at the insides. but be warned – it is messy. You also need to have Reactor 1.8 or newer. So how do you create your own U-Paint Helper VFBOX file? Each step is in general a transparent “overlay” that when stacked will produce the final image. (May not be always true) But it doesn’t mean it had to be that way. You can have steps anything you want – they don’t need to stack or combine into a picture. The final reactor flow is then saved as vfbox file and put into the User Documents\DAP\upaint folder. (When you are editing directly from the DAP interface, this will be all done for you) 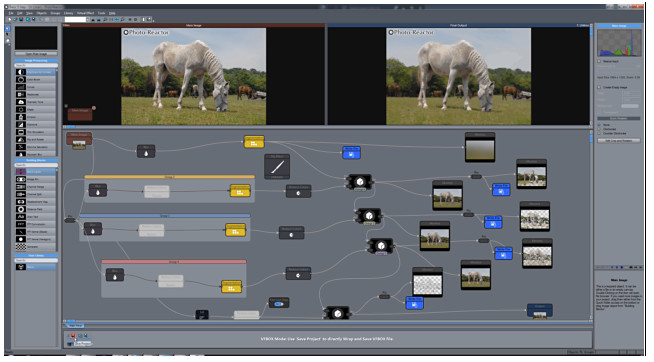 Each step is generated by attaching Write File Block where appropriate. The Write Block needs to have Name: “step” and also set “Add Number” which will then became the step number (make sure you don’t have gaps in numbering). 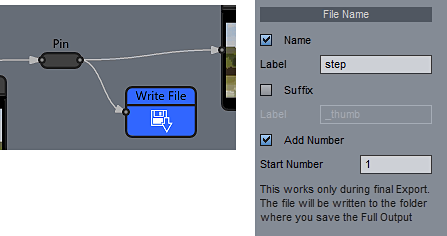 Note: In the new reactor you may find few interesting things if you have Photo-Reactor 1.8.1 and newer like the image below. 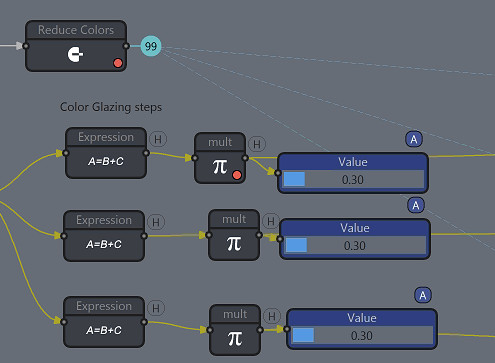 The first thing is there are straight lines with a number.  This is called “Beams” and it simply connect an object to the same node number somewhere else with a thin straight lines without making all the wormy connecting lines. Sort of like a portal. Right click on the object, select Line Draw and there it is. Second thing is the sliders are blue and have an “A” to them. This is called a “Group Link” and it means when you move one slider, all of them having the same “letter” will move as well. This translates to the VFBOX parameters as well. And that is the third thing -an object which has any of its settings present in the Parameters (parameters that will be visible in VFBOX) has a small red dot. Well if any of the linked parameter of object (such as our “mult”) has a slider attached to the parameter and that slider is set in a group link, moving the parameter in VFBOX file (for example inside DAP) will ultimately change all the other linked sliders and parameters (in our case – all the “mult” objects). To change the group link – click on the slider and look in the right hand properties – there should be a combo box where you can set the group “letter”. This works for slider and a knob.

Get Notified About Updates